The Catolith burned on October 31st, 2020, at about 10:10 PM on Halloween, on the rare “Blue Blood Moon” at the Soggy Dry Lake Bed in the Johnson Valley OHV Recreation Area/Marine Base Boundary in the Mojave High Desert in California.

I encountered opposition from the authorities, yet persevered to burn the Catolith. It was crucial to me that Blazing Cat be held on public land.  Burning an effigy on public land is at the crux of Burner Culture in my opinion.  Festive gatherings of people upon public lands in modern times harken back to traditions of Mayday (Beltaine) in Medieval Europe where young men and women would ritualistically gather wood from the forests to burn in Mayday Bonfires – an exercise of the common peoples’ rights to cut timber, symbolic of the peoples’ ancestral ties to the land in the feudal states of Europe, and in contradistinction to religious and imperial hegemonies that sought to reserve such properties within political boundaries.

The Catolith erected at the Soggy Dry Lake Bed with full Moon rising.

I felt that because the Man, the effigy of the Burning Man, did not burn this year at “Black Rock City”, it was my honor to hold Blazing Cat, my way of holding the Burn. However, the sheriffs were posted at Giant Rock (my preferred location because of it’s rich history in the UFO culture) over Halloween weekend, and were turning away anyone that came there for Blazing Cat. I sought for another place to burn the Cat.  I drove the Cat down to “Slab City’ at Niland by the Salton Sea and hoped to burn it at the East Jesus outsider art site where I had done installations before, but was rebuffed by the caretakers of that place.  I returned to the High Desert and Burning Man documentarian, Harrod Blank, suggested I take the Catolith to Means Dry Lake Bed.

On the afternoon of Saturday, October 31st I arrived at a Marine Base outpost at the Means Dry Lake Bed and there a Private informed me most politely that I could not erect the Catolith effigy there since the Marines were doing “special exercises” at that lake bed and would be doing so for the next two months (much to the derision of the OHV enthusiasts who are also excluded from using that land for the time being).  The Private suggested that I go to another lake bed some 10 miles away and put the GPS coordinates into my phone.  I drove to that location, the “Soggy Dry Lake Bed”, arriving there by myself with the Catolith loaded on my truck ready to be erected.  Soon a couple of guys on ATVs arrived and I explained to them what I wanted to do.  They brought their whole family, a big Mexican Family, and lickety-split, the Catotlith was erected!  They asked if they could come and watch it burn, of course, I agreed, and they asked if they could bring Mariachi Music.  I said, “Yes, bring all the Latin music; Cuban music, Cumbia, Salsa, Columbian Music.”  I think they liked that.

Later a Marine Police Officer rolled up and surveyed the Catolith, checked its GPS coordinates and told me that I was “imprescient”.  “Imprescient”, a word I’d never heard before, but rather liked, and I understood it to mean that my intuition in placing the cat was spot on because it was precisely on the boundary of BLM Land and Marine Base Territory.  He said if perchance there were any injuries then the Marines would provide medical assistance.  So we burned the cat there.

No doubt many will scoff at my pretension, my presumption, to assert that I was holding the Burn for 2020, but I will maintain my position.  For the following reasons I feel that “Blazing Cat” was the 2020 Burn: 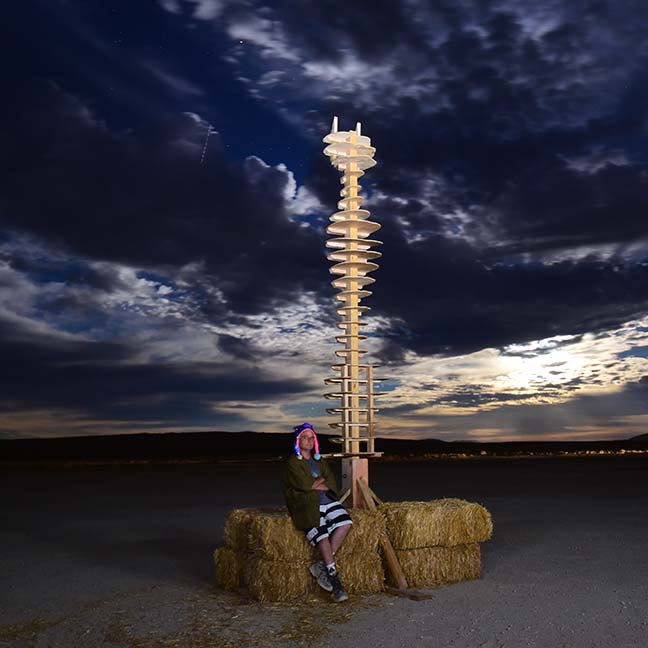 David Normal with the Catolith at Blazing Cat 2020.

What has distinguished Burning Man as a significant event from its inception was Larry Harvey’s capacity to frame the festival; its art, its rites, and its culture, in the broader context of Western Civilization.  Larry did this by creating themes that broadly referenced classical ideas, literature, history, mythology, as well as popular culture, and these themes encompassed the entire festival within a context that moored it to the greater narrative of Western Civilization.  The festival itself, centered around the rite of the burning of the Man effigy, has a narrative arc and a ritual catharsis that a mere music festival, rock concert, rave party or hippy festival do not intrinsically possess.  The combination of the ritual narrative arc of the Burn, the cultural context of the themes that defined the festival and its art, and the use of public land to hold the festival are the ingredients that give it its power and importance.

In many ways, Blazing Cat, was like pressing the reset button on Burner Culture.  The event itself ended up being very small (I never intended it to be a large event) just a handful of people including the OHVers who came to watch the burn.  Of the people that did show up it was mostly old time Cacophony Society folks/underground artists who have been associated with the Burning Man scene since the early days.  There were no rules of any kind.  In such a small gathering there was more a spirit of gentle camaraderie than the wild anarchism that the early years at Black Rock desert are legendary for.  In my opinion, we were keeping the flame alive in this difficult year when Burning Man, like so many other important events, have been cancelled due to the pandemic.

Going forward, Blazing Cat will prepare to hold the festival again in 2021, on public land, and with the formal permission of government authorities. Like Burning Man, it will frame itself within a broader conceptual and cultural context through the use of structured themes, rites, and artworks.  It will also support Burning Man culture generally, and the Burning Man event at Black Rock City.